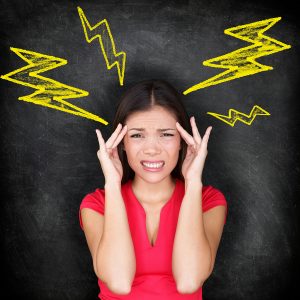 On July, a woman came to us in her fifties, she work in the hospital. she had very serious acute headache accompanied by tinnitus. during questionning she said that the headaches aggravated when she sat down or standing, so most of time she had to lie down.She went to see neurologist which told her to do lots of check ups and all of them were negative, so she got steroids 20mg a day and was raised up to 60 mg, the problem was that the steroids aggravated the headaches and after 10 days she stopped them.

When she came to us, the main symptoms were: sharp headaches changing from one side to another and also moving to the back of the head. in addition, she had tinnitus and described feeling in the ears like there is inside liquids but when the doc checked, there was nothing.
she used to sigh a lot, the white area of the eyes was reddish and her tongue was dark red, which in chinese medicine aspect, all showed signs of heat stuck in the liver.

When I asked her regarding her mood and if she have some kind of stress at work, she said no but lots of stress at home, because she had problem with one of her kids with the school, which continued till these days.

From than till now, more than 2 month, she got acupuncture and herbs, which improved her situation by 100% and nowadays except light feeling of blockage in her ears, she is ok.