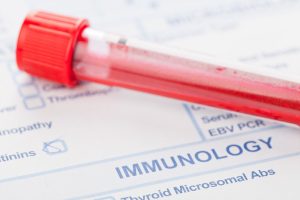 In the past we wrote a about a patient that was treated in another clinic and he put so many needles transforming her to hedgehog.

That patient who came to us, on of the main things she wanted to treat is to lower the times she need to inject an injection which boost her immune system because of the chemo side effect, this injection usually cause great tiredness with pain in the bones and other symptoms.

During the treatments in our clinic, we had success in her goal with the injections and also she started to feel much better. month and half ago when she had PETCT, we found out she have 2 new metastasis in bones, so the oncologist decided to change her treatment protocol which isnt so classic to breast cancer, include: GEMZAR with the HERCEPTIN.

Because of the side effects of new chemo, we decided to add new prescription mainly for the decrease of the white cells in addition to the origin prescription which suppose to fight the cancer.
The next time she had chemo, she took the herbs with 2 injections and in the blood count, we found out that the white cells were over the normal high border.

afterwards we changed our plan of the treatment time, so that in the 2 weeks she get chemo- in morning she takes the anticancer and at night the new formula for boost her blood counts but in the week off she takes 2 times day the anti cancer herbs. in addition she continues once a week .