An article about us in a chinese local newspaper

An article about us in a chinese local newspaper 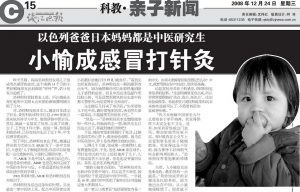 Yesterday morning mom, Terue, found out little yuval have cold symptoms, yuval now is 14 month old. he got phlegm in throat sounds like snoring, the problem is that mom, Terue, needs to go work but she had to wait till 8am so the aunt will come.

Terue is Japanese citizen, who finished her acupuncture studying for M.A and since 1999 she lives in China. after she finished the studying, stayed in Hangzhou, got married, a boy was born and now she works. she lives in Hangzhou more than 10 years and speak fluent chinese.Terue came to Hangzhou as single, while we were talking she took out her mobile and sms her husband, Arik, the sms was:” Yuval got phlegm, please bring with you some herbs to treat it”.
No Arik isnt chinese but Israeli. Arik also finished his studying in Israel afterwards arriving to Hangzhou continue his studying for M.A.

2005 while Arik started learning for M.A, they met in Hangzhou. after few minutes Arik sent Terue sms that herbs are faster but first better to do shonishin or give him eat something to transform phlegm but Terue seemed little angry because she wants yuval to get better fast. Arik called said that if prescribing herbs, better Arik’s teacher see Yuval or first Arik will see Yuval and than prescribe herbs, not just like this.

Afterwards Terue called the aunt and asked her to go buy radish in order to make soup which this way will help transform Yuval’s phlegm. according to chinese medicine the radish clear the lung, transform phlegm